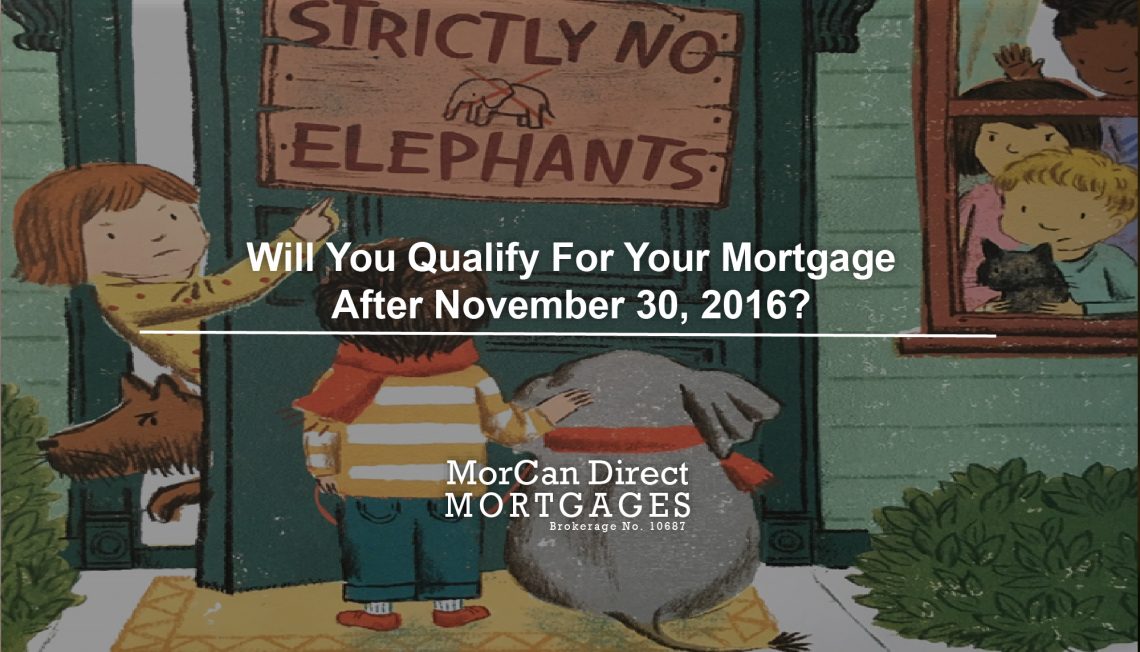 Will You Qualify For Your Mortgage After November 30th, 2016?

There are new mortgage rules that you probably have not heard about yet.

What is your home worth?

The Canadian housing market is just beginning to adapt to the new mortgage regulations that took effect October 17th, regulations that have received a lot of news coverage for their potentially outsized impact on first time buyers. But if you thought you were safe from the new rules because you’re not a first time buyer, or you own multiple properties, or you’ve amassed significant equity in your million dollar plus home – well, guess again. The Canadian government has a scary Halloween gift for you.

Effective November 30th 2016 if your mortgage meets any one of the following criteria then it will have to go to one of Canada’s Big Banks:

In other words, if you have a home in the Toronto or Vancouver areas that needs to be refinanced after November 30th 2016, it will probably have to be placed with one of our big banks.

Why is that the outcome of these new rules?

In addition to the many other layers of regulation added to the secured lending arena since 2008, the Canadian Government has decided to severely restrict an insurance product that was previously available to all Canadian Mortgage Lenders, by making it conform to the same underwriting guidelines as high-ratio insured mortgages. Portfolio Insurance, as it’s called, has resulted in Canadians accessing increasingly discounted mortgage rates over the past 15 years. This Government backed insurance has been purchased, typically by the lenders themselves, to insure mortgages they originate for which the borrower has greater than 20% equity in their home. In turn, the lender can package these low loan-to-value mortgages into bonds which can be sold to largely institutional investors as a low risk asset. By removing the loans from their balance sheets, lenders have been able to lower their cost of capital by about 30-40 basis points. Those savings are directly translated into lower rates for Canadians via increased competition between the Big Banks and non-bank lenders. This healthy competition in the marketplace also leads to more diversified product offerings – less restrictive penalties, greater prepayment options, and so on.

By neutering portfolio insurance, the government effectively removes non-bank lenders from the playing field because their whole business model relies on securitization. Without the competition from these alternative lenders, interest rates on any mortgage that meets the above noted criteria will be subjected to a higher interest rate as the Banks are no longer forced to compete for your business. (Don’t just take my word for it, TD Bank recently produced a report saying just that, which you can read here.) Expect to hear terms like “jumbo loan premium” or “luxury rate” a few months from now at your local branch.

Although it’s hard to believe that the Liberal Government would hand over the keys to the Canadian Mortgage Market to the Big 5 Canadian Banks’so easily, the facts are hard to ignore. For those of you looking to understand the full impact of the rule changes, what you can do between now and November 30th to get ahead of them, and the best way to take advantage of the resulting economic environment, here is a link to some more must-read material.