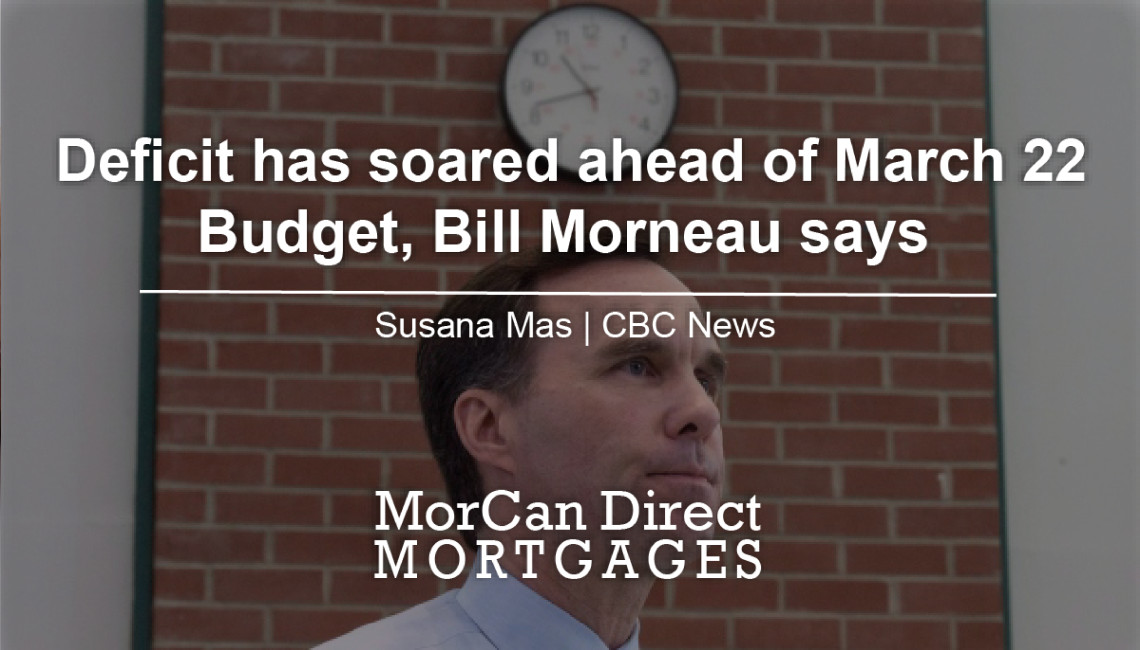 Deficit has soared ahead of March 22 Budget, Bill Morneau says

On Monday February 22, 2016 CBC News posted an article about the Liberal government forecasting greater than expected deficits for the next two years.

Susana Mas, CBC News – The Liberal government is now forecasting larger than expected deficits for the next two years even before adding billions in promised spending in its first budget, which will be tabled on March 22.

Finance Minister Bill Morneau presented the updated numbers at a pre-budget town hall in Ottawa on Monday, then took questions from the audience as well as reporters.

Morneau said the government will post a smaller than projected deficit of $2.3 billion for 2015-16, down from the $3-billion deficit projected inNovember’s fall fiscal update.

But that deficit will balloon to $18.4 billion in 2016-17 and $15.5 billion in 2017-18 — and that is before any new spending Morneau outlines in the March budget. Those numbers are drastically different from the $3.9-billion and $2.4-billion shortfalls forecast just three months ago.

“We’re not considering any tax changes at this time,” the finance minister said when asked whether the government would consider raising general consumption taxes.

The revised two-year economic and fiscal outlook takes into account sharp declines in crude oil prices since the fall update and continued uncertainty in the global economy.

Morneau said private sector economists now expect crude oil prices (for West Texas Intermediate) to average $40 US per barrel in 2016, down from $54 per barrel expected in the fall update. He said the current price stands at $31.50 per barrel.

Economists have also revised real gross domestic product growth for Canada to 1.4 per cent in 2016, down from two per cent growth forecast in the fall update. The GDP growth for 2017 remains unchanged at 2.2 per cent.

The federal finance minister blamed the weak economy on the previous Conservative government.

“After 10 years of weak growth, Band-Aid solutions, and inaction from the previous government, Canada’s economy was simply too vulnerable when faced with a combination of the drop in oil prices and economic uncertainty around the world,” Morneau said in Ottawa Monday.

“I find this reckless, irresponsible and it’s entirely the result of the finance minister and the prime minister not being able to make the decisions that they need to make today to respect taxpayers’ money,” Ambrose said on Parliament Hill.

Morneau said the Liberals will focus on making investments in infrastructure, innovation, measures to help the middle class and the country’s most vulnerable.

“We were elected to a fundamentally new approach to growing our economy. We said to Canadians that a time of low-economic growth the right thing to do is make investments in the economy,” Morneau said in Ottawa Monday.

“The wrong thing to do would be to make cuts.”

But Ambrose was critical of the government’s plan, calling it “a recipe for waste and mismanagement.”

“There’s no fiscal anchor left in this government,” she said Monday afternoon.

Following question period, NDP Leader Tom Mulcair said Canadians would be “disappointed” to see that the Liberals have backed away from “a promise to have smallish deficits.”

“Was it foreseeable that they were lying,” Mulcair said in French. “Probably, given their track record on the matter.”

Mulcair said the low price of oil and the downturn in the economy was already a factor during the election campaign.

The NDP leader urged the Liberals to make good on another campaign pledge to reform the employment insurance system to help unemployed Canadians.

A new analysis by the Bank of Montreal cautions the federal government against “an overly aggressive fiscal boost.”

“However, there are plenty of reasons why Ottawa does not have a free hand to spend on every priority, and must maintain discipline.”

Weaker than expected growth due to low commodity prices and provincial debt are some of the reasons the economists say, “Ottawa should proceed with prudence.”

The Canadian Taxpayers Federation urged the government to revise its spending plans ahead of the budget.

Aaron Wudrick, the federal director of the CTF, said the larger than expected deficit is another reason “to refuse a taxpayer bailout for beleaguered aerospace company Bombardier.”

“The cupboard is beyond bare,” Wudrick said in a written statement. “When the government cannot even afford to pay for existing programs and services, forcing Canadians to borrow an extra billion dollars to bail out a money-losing corporation would be an enormous slap in the face.”

Morneau also announced the appointment of Dominic Barton, the global managing director at the consulting firm of McKinsey & Company, as the chair of a new advisory council on economic growth.

The council, which Morneau said will be selected shortly, will provide him with policy advice “to help create the long-term conditions for economic growth with a focus on the middle class.”

Trudeau has already said his government will not be able to keep an election promise to keep deficits under $10 billion for the next budget year, and has backed away from a promise to balance the budget by the end of his four-year mandate.

The Liberals now say they will keep Canada’s debt to GDP on a downward trajectory, though Monday’s numbers suggest they may only narrowly meet that promise in the next two years.

Morneau is scheduled to appear before the finance commons committee on Tuesday.