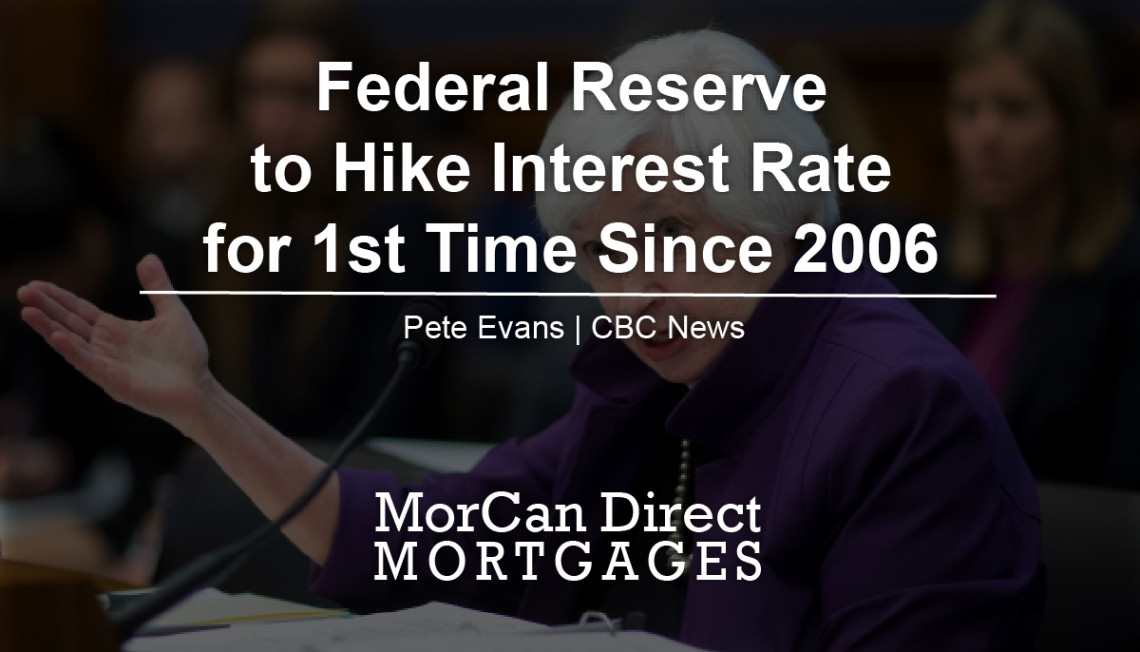 On Tuesday December 16, 2015 CBC News posted an article about the Federal Reserve’s hike in interest rates for the first time since 2006.

Pete Evans, CBC News – The U.S. central bank began raising interest rates today from record lows, as it hiked its benchmark rate by a quarter of a percentage point.

The Federal Reserve raised the range for its federal funds rate to between 0.25 and 0.5 per cent on Wednesday, the first time America’s central bank has raised its benchmark rate since 2006.

In addition to its benchmark federal funds rate, the Fed also hiked its interest rate on excess reserves and its rate on overnight reverse repurchase agreements by the same amount — 25 basis points.

“This action marks the end of an extraordinary seven-year period,” chair Janet Yellen said in a question-and-answer session after the bank’s statement was released. “A modest increase is now appropriate.”

That’s the Fed’s way of saying it thinks the U.S. economy is finally strong enough to start standing on its own two feet. But the bank made it clear it is not in a hurry to hike rates rapidly, suggesting “gradual increases” are the general plan.

“The Fed is [saying] we’re going to raise rates a tiny bit, and then maybe in 2016 a tiny bit more,” said Diane Swonk, chief economist of Mesirow Financial. “But they want to acknowledge that the economy is strong enough to handle this, without hurting any growth.”

Swonk suggests the Federal Reserve will be cautious and slow as it begins to ratchet up rates over time.

“Yellen wants to be a hovercraft, not a rocket ship,” she said in an interview with CBC-TV’s The Exchange on Tuesday.

Economist Michael Gregory at BMO says Wednesday’s hike is a sign that rates are going to slowly rise only if everything goes according to plan. “The normalization process has begun, but policy rates are still going to be ‘low’ for a very long time,” he said.

The reaction from major U.S. banks was swift. Within minutes of the announcement, Wells Fargo announced it was hiking its prime lending rate to 3.5 per cent from 3.25. Citibank, JPMorgan Chase, Bank of America and U.S. Bancorp were quick to follow. That means people borrowing money from those banks have to pay more for some of their adjustable-rate mortgages, home equity lines of credit and consumer loans.

But while it’s going to charge borrowers more, Wells Fargo announced no hike to its deposit rate — the amount it pays to savers when they store their money there.

Investors on both sides of the border cheered news of the Fed hike as a vote of confidence in the U.S. economy.

The Dow Jones industrial average, which was up about 75 points just before the Fed announcement, ended the trading day with a gain of 224 points, at 17,749. Bank stocks rose as loan interest rates will increase, boosting the bottom lines of lenders.

The Toronto market also saw a big jump, with the S&P/TSX composite index up 246 points, or 1.9 per cent at day’s end — its second straight day of 200-point increases.

“The market as a whole is happy to get this first rate hike out of the way and potentially focus on other things, like the state of the economy,” said Scott Guitard, portfolio manager at Fiduciary Trust Canada.