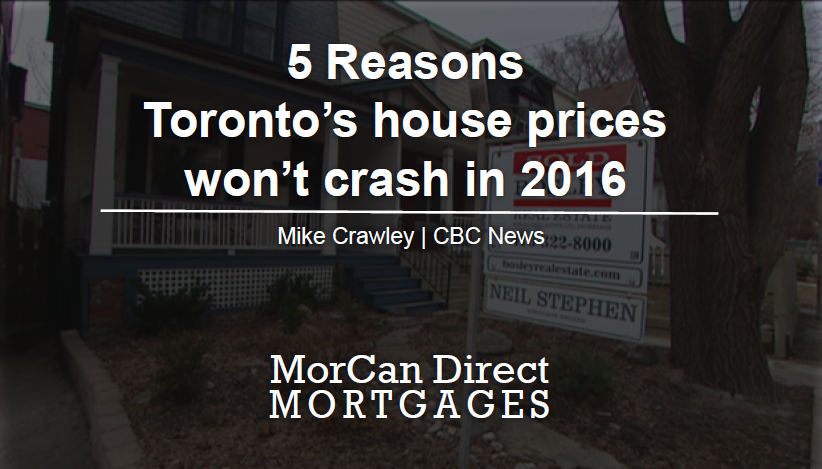 On Thursday, January 7th, 2016 CBC News posted an analysis detailing why they believe that the Toronto housing bubble is not about to burst anytime soon.

Mike Crawley, CBC News – After the Greater Toronto Area’s record year in 2015 for both the number of homes sold and the average price, the question is: when will it all come crashing down? The answer: not in 2016. Here are five reasons why this won’t be the year of Toronto’s housing collapse.

It’s the simplest rule of market economics and it applies to Toronto’s real-estate market. The population keeps growing, and people have to live somewhere.

There’s little room to build more single-family houses to increase the supply. The demand from families who want to live in the city with a patch of grass remains huge. The number of new listings on the market continues to be outstripped by the number of buyers.

As for Toronto’s condo market, it’s a myth that it’s oversupplied: the inventory of unsold condos is shrinking, and with first-time buyers nearly priced-out of the house market, the demand for condos remains steady.

“I don’t see the market falling at all in 2016,” said John Pasalis, president of Realosophy, a Toronto real-estate firm. “We’re getting further into this imbalance where demand is exceeding the supply of houses coming on the market.”

“Usually when the market’s slowing down and prices fall, you can see signs of that well ahead of time,” Pasalis said in a phone interview. “When you look at the momentum in Toronto’s market, it’s not going in that direction.”

If the economy shrinks, jobs disappear and people are forced to sell their homes. Supply goes up, demand is down, so prices drop. This has happened twice in Toronto in the past 30 years: a quick dip in the 2008 recession, and a deep collapse in the early 1990s recession. There is no recession on the horizon for the GTA in 2016.

“The fundamentals facing Toronto’s housing market are generally quite decent,” said Robin Wiebe, a senior economist with the Conference Board of Canada think-tank. It forecasts economic growth of 2.8% for the metropolitan area in the coming year and predicts employment will grow too.

Ontario’s economic growth has actually been rather sluggish the past six years, yet Toronto’s house prices have just kept soaring. The average sale price in 2015 was 64% higher than in 2008. So even if the economy sputters, house prices are unlikely to tank.

3. Mortgage rates will rise, but gently

It’s telling that the Royal Bank’s announcement that it will push some of its mortgage rates up by just 0.10% on Friday actually qualifies as news.

“It would take quite a significant increase in mortgage rates to trigger a crash,” said Sherry Cooper, chief economist at Dominion Lending. “I don’t think interest rates are going to rise dramatically.”

“We forecast interest rates will be relatively benign through 2016,” said Wiebe. For Toronto’s housing market to crash, “you’d have to see a really large spike in interest rates or a really large drop in employment,” he said. “It always could happen but that’s not what us or anybody else frankly is expecting.”

You’ve heard it before: the bubble has got to burst. Investment expert Hilliard Macbeth predicted last spring that Canadian houses prices will crash by as much as 50%. David Madani, the Canadian chief economist of global forecasting firm Capital Economics, warned of a housing price slump back in 2011. He did it again in 2013. And he did it again last spring. Financial author Garth Turner has been predicting a crash steadily since 2009, when the market rebounded following the recession.

“Toronto’s not a bubble by any definition,” Pasalis said.

Wiebe described a bubble as “when people buy houses purely for speculative reasons, with the sole motive of making money.” He said that’s not what’s driving Toronto’s market now.

The time that Toronto’s bubble truly burst was in the early 1990s. That followed a crazy period when the average house price doubled in just three years. GTA house prices have not risen at anywhere near that pace anytime in the past two decades.

There’s no question it’s getting more difficult to afford a house in Toronto, with prices rising so much faster than incomes. But Wiebe points out the average price of a condo is roughly half that of a single-detached house. “If somebody is looking for a single detached home in the old city of Toronto, it’s going to be expensive, but that is not the only housing solution available.”

“I don’t think we’ll see a crash because the average household is still in good financial shape,” said Cooper. “Yes, it’s true that debt-to-income ratios have risen, but household wealth has increased more than household debt.”

“Most people still want to own their own home,” she added. “They may have to have a much longer commute to work and live in much smaller space but I don’t think the basic psychology is going to change.”

Cooper predicts Toronto housing prices will rise in 2016, just more slowly than in the past few years.